Sunday, the Baa-Baas offered us a gala match against a kind of reserve of All Blacks. On both sides, big names (McKenzie, Hastoy, Mercer, Marchant…) and offensive intentions that promised us a spectacular match. Unsurprisingly, 66 points and many trials were also marked in this meeting placed under the sign of the game. But the one that marked us the most is undoubtedly that of a Habs, Rochelais since this season: Teddy Thomas. In the 50th minute of play, the winger connects well with his club mate Dillyn Leyds, who, in the opener position, landed him a skimming game in the back of the defense. The 29-year-old winger takes Bryce Heem in the race and just before the back Sullivan recovers the ball, extends with the foot of a half-volley that CR7 would not have denied.

Joe Marchant had followed well inside and recovers this game on the fly, before aiming for the corner post. Damian McKenzie comes back like a plane across and thinks of making a saving return but the future Parisian manages to raise the ball, on the ground, for Thomas, who had smelled the right shot. The former Racing player then only has to collapse in the in-goal of the Tottenham Hotspurs Stadium to be rewarded for his match and score a sublime try. One of the most beautiful of the year? 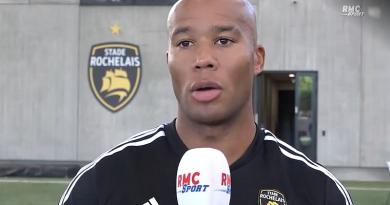 RUGBY. La Rochelle. ”This is my last chance”, says Teddy Thomas before the resumption of the Top 14