Rarely has an edition deplored as many brand absentees as the World Cup 2022. While denouncing the infernal pace imposed by the calendar in recent years, several major players will miss the tournament in Qatar. Here is our typical team of absentees from the 2022 World Cup (as of 17/11/2022).

Elected best player of the last Euro and decisive during the penalty shootout in the final against England (1-1, 3-2 on pens), the goalkeeper will be one of the big absentees from this World Cup due to the non – qualifying for Italy. After a mixed first season at Paris Saint-Germain due to his blunder which precipitated the fall of his club against Real Madrid in the knockout stages of the Champions League, the former Milanese enjoys a number one goalkeeper status undisputed this season in the capital and continues XXL performances despite a few errors to be erased.

In a position where the Three Lions can count on an abundance of talent (Trent Alexander-Arnold, Kyle Walker, Kieran Trippier, etc.), the very offensive right piston of Chelsea had taken the upper hand in recent months and this World Cup was announced for the best. And then wreckage… Formidable counter-attacker and renowned for his quality of passing, the Blue suffered a fatal knee injury on October 13th and he will have lost his time trial to come back on time…

The name of the central defender is one of those that has stirred the transfer window the most in recent months. One year from the end of his contract, the 1m88 rock was PSG’s priority defensive target last summer. But Inter was inflexible in blocking his taulier. The performances of the Slovak, less sharp this season, seemed impacted by this soap opera. Skriniar nevertheless remains one of the world references in his position but will not be there in Qatar due to the non-qualification of his country.

The story would have been beautiful for the Spaniard. No longer summoned to the selection since March 2021, the central defender is finally playing matches with PSG after a nightmare first season in the capital due to incessant physical glitches. Back in good athletic condition and rich in his unparalleled experience, the 36-year-old dreamed of tasting a fifth and final World Cup, but Luis Enrique decided otherwise…

A true Swiss Army knife, Alaba took advantage of his versatility to establish himself as an indisputable starter at Real Madrid upon his free arrival in the summer of 2021 from Bayern Munich. Used mainly as a central defender, but also regularly as a left side, the Merengue sometimes evolves as a left attacking midfielder with his selection. But we will not be able to realize it in Qatar since Austria fell in the play-offs against Wales. 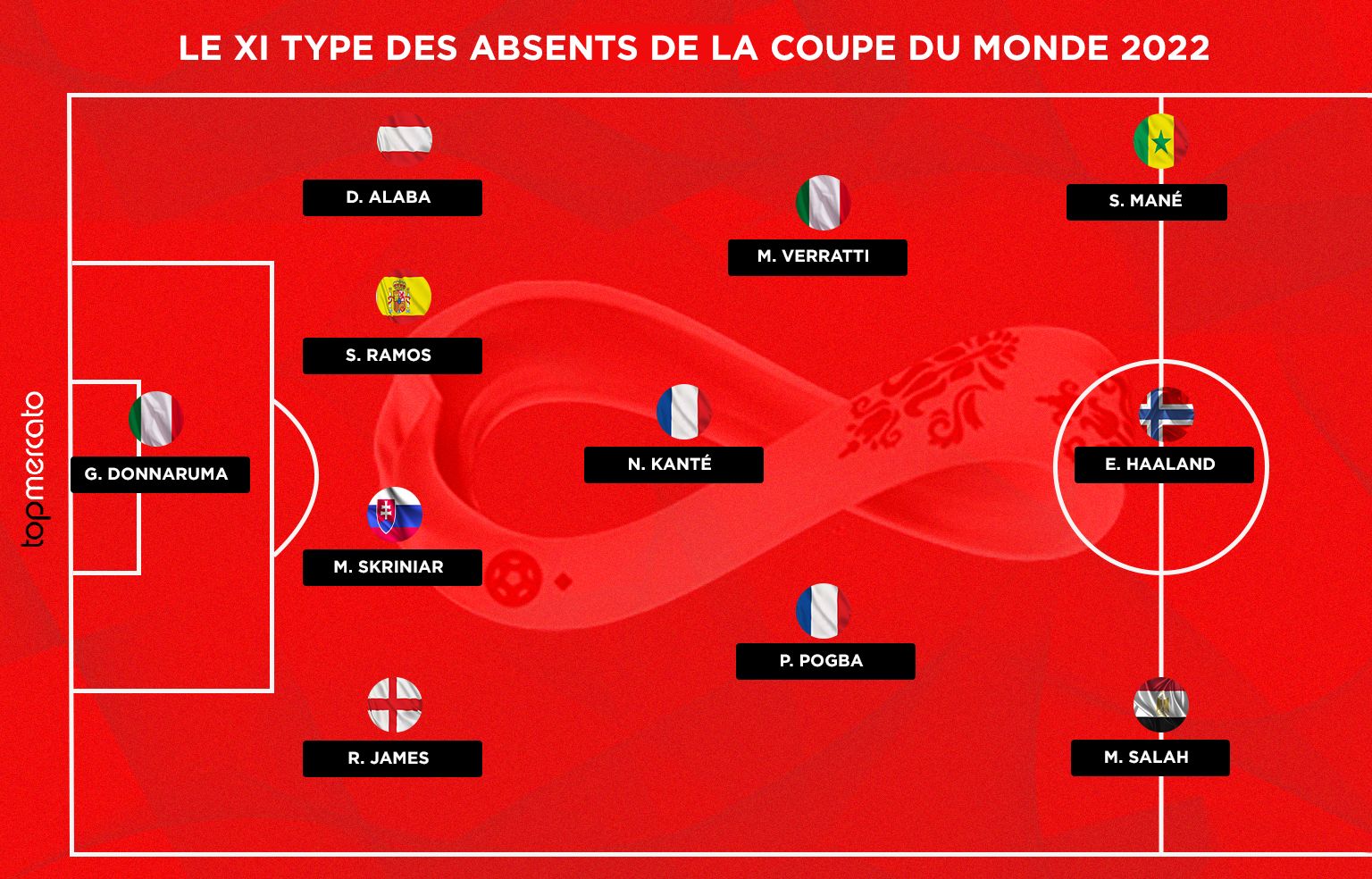 Shining throughout the victorious journey of the French team in the previous edition, La Pioche then never really confirmed at Manchester United. Between ill-being and injuries, the Habs left MU last summer, leaving the fans hungry. Destination: a return to Juve. Except that between his various physical problems, the Habs have not yet played for the season and he had to resolve to forfeit the World Cup after having knee surgery. Also a victim in recent months of extortion attempts by an organized gang, the Frenchman is going through a bad period.

“He’s small, he’s nice, he stopped Leo Messi, but we all know he’s a N’Golo Kanté cheat…” After finding himself at the center of a catchy melody in 2018, the midfielder has been in the tough spot for a year and a half because he suffered repeated injuries. The man with three lungs can no longer string together matches and he withdrew from Qatar in October to have hamstring surgery.

Spared by physical glitches, the midfielder gives the full measure of his talent in this first part of the season at PSG. Active in recovery, valuable for his quality of possession of the ball and decisive with his passes that make the difference, the winner of the last Euro will be one of the most missed Italians in Qatar.

AFCON final, Champions League final, World Cup play-offs, 2e place in the Premier League: look no further, the loser of the year 2022, it’s him! But a magnificent loser then. Even orphaned by his friend Sadio Mané, who left for Bayern Munich, the Pharaoh remains capable of flashes which do a lot of good for Liverpool in this gloomy period. We think in particular of his hat-trick in 6 minutes and 12 seconds in the Champions League or, more recently, his double against Tottenham.

If it were now necessary to elect the next Ballon d’Or, it would certainly be him. Passed from Borussia Dortmund to Manchester City and from the Bundesliga to the Premier League as one goes from the kitchen to the living room, the serial scorer continues to panic the counters week after week for a staggering record of 18 goals in 13 Premier League games plus 5 in 4 Champions League games. Only problem: Norway did not qualify for the World Cup and the superstar will watch his competitors for the Ballon d’Or shine on TV…

Author of the decisive shot on goal in the final of the last CAN then during the World Cup barrage against Egypt, the winger was to embody the technical leader and X factor of a selection from Senegal that many observers see playing trouble- holidays. Unfortunately, the 2e of the last Ballon d’Or will not be recovered in time from his injury and he had to resolve to forfeit three days before the start of the competition. A huge blow for the Bavarian and his country, which carried the hopes of an entire continent.